an unprecedented example of how thoughts become things

No holistic approach to breast enhancement would be complete without validating your desire to have appreciably sized, firm breasts. Rarely does a woman inwardly accept small, drooping or pendulous, or flaccid and sagging breasts. NaturalWoman® is indicated when results of puberty are unsatisfactory; after breast feeding, weight loss, loss of volume from aging, even to boost already existent implants which have started to sag.

A high opinion and love of one's self is the ultimate aphrodisiac, but by what criteria and through whose eyes does a woman come to see herself as attractive? Beauty ideals are ingrained from birth by culture and by the media. At an even deeper level, man's predisposition to think and feel in certain ways that will guarantee his continuance, has always favored breast size.

It is still considered a healthy response when a man lights up at the sight of a provocative pin-up of a very confident nude. In fact, breasts are being glorified now more than ever. Evolutionists characterize them as sexual "ornaments," traits that evolved solely to attract and impress a potential mate, like the enchanting train of a peacock when fully fanned.

Indeed, the human female is the only primate who develops full breasts long before they are needed to nurse her offspring. When you think of it, what is the purpose of them outside of childbirth, other than to signal and entice? It's only implants that lend them the dubious distinction of being an "anomaly."

The hour glass figure such as was enjoyed by the late Marilyn Monroe, is a standard of beauty initially celebrated as a sign of fertility, not a yardstick against which all woman must compete, or a way to validate male prejudice in regard to how women "should" look in their fantasies. According to evolutionists, the arousal males experience outside their conscious control, harkens back to a primitive time when large, firm breasts were a reliable indicator of youth and fertility in his unconscious drive to promote himself. This is what makes them erotic. Perhaps mixed with a little regression for mother's breasts. 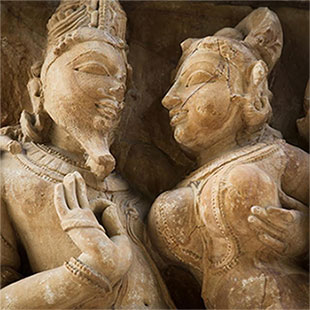 Ancient man instinctually knew that a female with an hour glass figure had higher levels of sex hormones on board, being as lots of estrogen is what sculpts this shape in the first place. Today we know there is a direct correlation between estrogen levels and a woman's ability to conceive, and that larger breasts and ample hips are conditions more suited to childbearing, and subsequent nurturing.

Modern women are able to stay looking young well beyond their reproductive years. It would seem to follow that older men who lust after older women with enhanced breasts and blonde hair are subconsciously attempting to mate with younger, fertile women. Though men cognitively understand the difference, let's face it, they are hard wired.

But when a man is attracted to a female's breasts, he is not thinking about what a great mother she would be. He simply experiences sexual arousal. Nor is a woman interested in showing how good she would be for breast feeding. Her desire for more prominent breasts is to improve her sex appeal.

At some point breasts took on more of a sexual role than a maternal one. It all started when females became available for sex on a full-time basis, not just during periods of fertility. This would have kept their mates from searching for other females while they were not in estrus (Morris, D., 1967). You see, early hominids were foragers who went about on all fours. Once they moved on to become bipedal hunter-gathers, the mating style switched to face to face. The color changes that signaled estrus would have been concealed in the upright position, so this cue was eliminated by natural selection. Meanwhile, the female's flat thorax evolved into breasts as a result of a favored mutation. If we were to indulge Desmond Morris who wrote The Naked Ape (1967), rounded breasts are erotic because they remind man's primal instincts of buttocks, where mating takes place. Thus breasts equipped females to entice and attract whenever they chose to, irrespective of color changes or ability to conceive. Further, frontal contact strengthened the ties between the two individuals and may be how we developed into a monogamous species then went on to even become spiritual.

How Size Came to Matter. Women receive a lot of subliminal approval and male acceptance for possessing large breasts. Who knows but we may even be unwittingly reinforcing the feedback loop of sexual selection that escalated the gene for breasts on women in the first place.

Most birds don't have massive useless tail feathers like the peacock. His fantail is a good example of a sexual ornament. Likewise, conspicuous breasts are unique to humans for attracting and impressing potential mates. Sexual ornaments are secondary sex characteristics, features that distinguish the two sexes of a species but that are not directly a part of the reproductive system, rather traits that give the advantage over rivals in courtship and aggressive interactions. ("Sexual Selection," 2010.)

But once the gene for the feature emerged, the first move at the party toward appreciably sized breasts did not start an international arms race leading up to a triple D's.

No, in terms of humans, "the upper limit on size would be the point at which the breasts would not be firm even at puberty, and the point at which natural selection would check runaway sexual selection (Marlowe, 1998, p. 268, para. 1)." Also, it would have paid females to co-evolve or co-select this trait in order to compete for the most genetically endowed males who tend to also make the best providers.

Size depicts better fitness. Only a fit body can afford to invest so much in a trait that is basically non-essential for its survival. A woman with large breasts would be able to invest more in producing offspring than the body of a woman with smaller breasts would be.

All things being equal, the evolutionary loss of the penis bone in humans, when it is present in other primates, may be due to sexual selection by females looking for an honest advertisement of good health in prospective mates. Since a human erection relies on a hydraulic pumping system, erection failure is a sensitive early warning of certain kinds of physical and mental ill health. (Dawkins, 2006 [1976], as cited in "Sexual Selection," 2010).

Additionally, large, firm breasts would have made it easier for the male Hominid looking for mating opportunity to judge a woman's reproductive value by sight for the fact that big breasts sag more noticeably with age than do smaller breasts, whereas smaller breasts on an older woman can belie her remaining reproductive value (Marlow, as cited by Miller, A. and Kanazawa, S., 2007).

But before you start thinking the story of evolution was written by men and for men, man's survival into the 21st century is in no small way due to some clever strategizing on the part of the female. Females learned to discern and denounce unreliable providers and refuse them sex. Indeed, "The ability of women to identify unreliable providers, remember who they were, realize that they would probably do the same to a new mate, and resist courting by such males, may have led to the evolution of female intelligence (and hence of human intelligence) (Miller, E., 1993, "Female Rewarding…" para. 4). Investment in an abandoned pregnant female, as evidenced by her breast size, lead to an increase in the life expectancy of the mother and to fathering her next child, which worked much better to promote man's reproductive success than by impregnating as many females as possible.

This translated to more descendants, and would also explain why big breasts bring out the provider in men or why men chose to put more mating effort into women with larger breasts. While we recognize that this may not always be the case--"The exact genetic mechanism by which male standards of beauty are coded is unknown (Miller, E., 1993, "The importance of lactation," para. 8)," one thing is for certain: firm, ample breasts are never a disadvantage.

Dominant males who fought for and won all the fertile females began to succumb to the wisdom behind monogamy. Thus we entered the dawn of the age of provisioning. So, rather than buttocks, our perennially enlarged breasts may be a permanent reminder, like the vestigial wings of an ostrich, of those days when their purpose was to draw attention to a Madonna in need.

On a purely instinctual level, we only know that great breasts work, not why they do. The conversation taking place amongst hypothethists is exceedingly mind-boggling, even by their own scholarly standard. All things told, the sex appeal of large, firm breasts cannot be denied. A woman who wields them with confidence and taste is much more likely to capture male attention, and therefore his "seed." She is met by other females with a mix of jealous anxiety, awe and respect. Societal advantages are given to those who are well endowed and proud of it. This confidence, and with the peacock feathers to back it up, makes her a more popular prospect among genetically superior males with the best provisioning value. He in turn has a vested interest in passing on the genes for large breasts to his female off spring.

No matter which way you turn it, a woman's confidence and self-esteem is buoyed by the sense of charm, sensuality, and sexuality that comes with knowing her breasts are attractive in looks, feeling and in touch. Implants, on the other hand, are easy to spot, plus there is an inordinately high incidence of regret, for medical as well as aesthetic reasons. They can lead to even more self-consciousness than insufficient mammary glands.

The situation is, we would all prefer our breast to be our own, judging safely from the male perspective as well. Implants offer immediate gratification, but ironically they represent a smaller reward now, at the expense of a larger one later.

Fortunately, we also evolved alongside the plant world, so "it makes sense that our bodies are fluent in their language (Pick, 2008, " Phytotherapy: at home in your endocrine system," para. 5) ." Plant estrogens are so similar in structure to human estrogen that we utilize them the same way we do our own endogenous or native estrogens. They bind to receptor sites the same way a plastic key that is identical with a metal key will click open the same lock, initiating healthy cell proliferation (like breast growth during puberty and pregnancy).

As long as male care and provisioning still greatly influence female well-being, or that sexual attraction factors into anyone's birthright to fulfillment, including gays and transgenders, there will always be a call for scientific advancement in natural breast enlargement, NaturalWoman® is the most advanced formula to date, meeting all three criteria: it is safe, assuredly effective, and results are permanent, placing it within your power to have the breasts you desire without implants.

"Boys think girls are like books. If the cover doesn't catch their eye, they won’t bother to read what’s inside."