In
spite
of
the
widespread
acceptance
of
cosmetic
surgical
procedures

the
drawbacks
remain
at
cross
purposes

in
light
of
the
dramatic,
perennial
enlargement

(the
best
kept
secret
of
the
well-
endowed)

Stay
natural
and
stand
out
in
a
plastic
world!

Natural formula for breasts the "plant-vs-implants"Woman®

NaturalWoman® can both spare you the knife (or cannula, as the case may be) and have everybody wondering who your surgeon was! 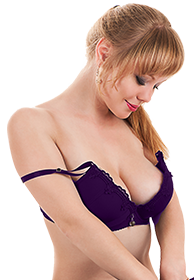 A chill running up and down your spine has got you thinking responsibly about the cosmetic and safety risks involved in fat transfer surgery (lipo-augmentation) and implants.

Results with fat transfer (lipo-augmentation) are more natural than implants, but still potentially regrettable in light of the dramatic, irreversible results that can be achieved with NaturalWoman®, at a fraction of the cost and without any of the aesthetic or medical complications. Among them, lumps from fat necrosis (death of fat cells) are typical, and a fatal fat embolism, however rare, could occur if fat were to be mistakenly injected into a blood vessel or absorbed into the blood stream via a vessel broken during liposuction. Plus it is strictly fat, without regard to glandular tissue, and for all the time, money and effort, the fat grafts reabsorb 40-60%, leading to multiple procedures done over a period of two to six months, provided you even have enough fat (or money).

Before NaturalWoman®, "primary breast augmentation" was a category occupied only by these surgical methods. They offer immediate gratification but, ironically, at the expense of a larger reward later using NaturalWoman®, namely breasts that are your own and guaranteed to be aesthetically pleasing and free from medical complications and future revisions. NaturalWoman® is primary augmentation in the truest sense, as it works with your own body at the most primal level to engender real breast tissue growth, which increases exponentially until you reach your desired set-point.

Both the development and replenishment of our breasts depend primarily upon estrogen. It's what sculpts the hourglass figure in the first place. Normally, for hormones to be released, the body needs a driving force, a call to action, triggered by the biological events of puberty and pregnancy. You'd think we'd be able to compensate just by taking estrogen, but the quantities required could cause liver damage, blood clotting, cancer.

The good news is that we have estrogen in common with the plant kingdom. "True" phytoestrogens (as defined by their ability to bind with affinity to estrogen receptors in the breasts and trigger actual breast tissue growth), work the same way a plastic key that is identical to a metal key will click open the same lock, resulting in the proliferation and differentiation of healthy breast tissue. In assays of estrogenicity, the active phytoestrogens in NaturalWoman® rank highest of all the previously identified phytoestrogens, rivaling estrogen itself for providing meaningful growth at the receptor level. Compared to steroidal estrogen, they are harmless, perhaps due to shorter duration of retention.

The "plant-vs-implants" formula is a potent botanical preparation consisting of mastogenic herbs chosen for the synergy of their diverse contributions to mammogenesis, each having a long history of safety, to the credit of many a quasi-occult medicine man of folklore; and crop plants that are not typically a part of the modern diet, but which are essential to the synthesis and bioavailability of the formula's phytoestrogens.

NaturalWoman® is formulated in adherence to the wisdom of the traditional use of the whole herb. The practice of extracting and concentrating the compound thought to be responsible for the action of an herb (which can sometimes even be wrongly identified) was started by the pharmaceutical industry for profit (because they can't patent plants), then herbal medicine followed suit. This is done at the expense of other potentially important phytochemicals and co-factors that may contribute to the activity of the whole herb in helping our bodies both utilize them safely and derive the most benefit from them. Ironically, true potency results from the interaction of all constituents and co-factors within an herb and/or among a prescribed combination of synergistic herbs, not from isolating the active constituent(s), which then no longer belongs to the plant kingdom but to the molecular world. This runs counter to the holistic view that each herb is an ecosystem that combines all of its parts to produce the desired effect.

If the idea is to feel secure in your own beauty, comfortable in your own skin, how comfortable can prosthetic breasts be? It goes without saying that the organic way is the smartest choice. The distinction we make between natural and holistic in terms of integrity of ingredients and wholesomeness of results, renders surgery unnecessarily excessive and all other formulas unhealthful and scientifically obsolete.

Please sign our guest list by entering your email. By doing so you are also asking to be included in new product updates and special offerings which we send from time-to time, only to this list, which never gets shared.

Some of Our Advertisers

* Herbal supplements are not evaluated by the FDA. Statements made herein are provided only for informational purposes and are in no way meant to substitute for medical advice nor to diagnose, cure, treat, mitigate or prevent any disease. If you have or suspect that you have a medical condition, you should first consult with your physician, also to be sure the ingredients do not interfere with any medications you may be taking. Pregnant and lactating women should not use this product.

The good news is that the potential for breast growth is maintained throughout reproductive life and even thereafter. Mammogenesis begins in puberty and does not reach its full expression until a baby is born, but the cycle of proliferation and differentiation is repeated with each pregnancy - or by taking NaturalWoman®. The difference is that the results are permanent. It can bring your breasts to fruition even if you have never been pregnant or if things did not happen as they should have during puberty. It can restore volume after breast feeding, weight loss, and to aging breasts, as well as provide a new opportunity for growth beyond firming up and filling out at a rate which increases exponentially until you reach your desired size.